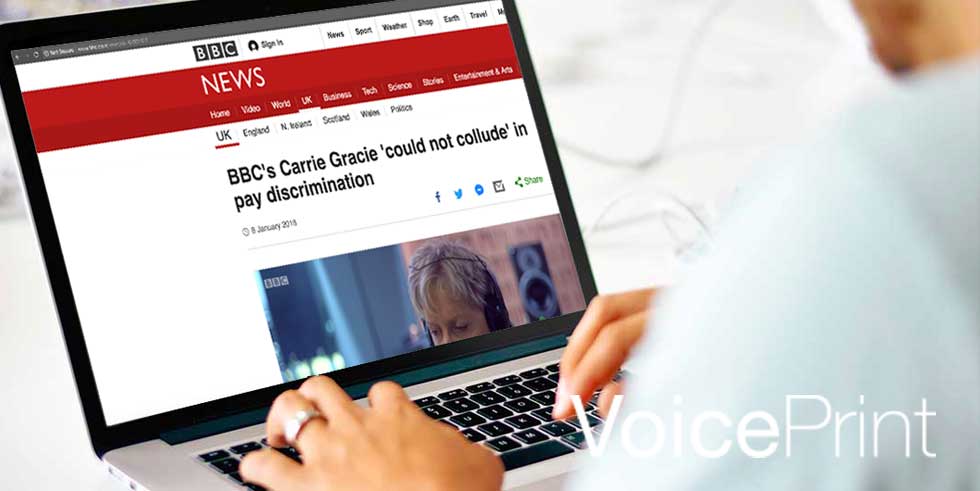 I don’t like telling people that they should read something. It’s too directive for my taste. But there is a time and a place for each and every one of the nine voices, and this is a time for the directive voice.

If you’re someone who cares about gender equity, or someone who is interested in good communicating or if you simply spend some of your own hard-earned cash to pay for a BBC licence fee, and want to be assured that the money is being well spent, then you should read the letter that Carrie Gracie published at the beginning of this week, when she resigned from her role as the Corporation’s China Editor.

It’s an exceptionally powerful statement. It runs to some 1400 words over 80 sentences. It’s only about three and a half pages long. And it makes a compelling case. You can find the text of the letter at carriegracie.com/news.html.  Read it.

The purpose of this post is not to reiterate Carrie Gracie’s argument, but to say something about the ‘voices’ that she uses in her letter and why they make it so powerful.

In VoicePrint terms she only employs five of the available voices and 85% of what she says is delivered in three of them. Principally she advocates, articulates and critiques.

The primacy of advocacy in this case is to be expected. She is stating her position and explaining the personal thinking and feelings that lie behind it. But what makes her personal account of what led her to her decision to resign, and to her potentially even more headline-seizing decision to turn down the offer of a £45,000 pay rise, is the way she uses the articulate voice to frame and contextualise her advocacy and the critique voice to support and show her rationale.

Articulate is the voice of clarification. It is careful and precise with words, factual and objective. It is the key voice in reportage, if reporting is to be neutral and trustworthy. Using it to introduce points of fact and to describe the circumstances and events behind her eventual decision, serves to give her advocacy not only a stronger verifiable foundation, but also greater credibility and gravity.

Critique is the voice of evaluation. It is insistent on recognising problems and shortcomings. And then thorough, balanced and reasoned in how it assesses them. Ideally, it is perfectly objective, if such an ideal can ever be realised. The issue that Carrie Gracie raises is social and human; by definition it is impossible to be purely objective in such matters. She is arguing for a cause. Yet she endeavours to provide a balanced weighing of the evidence, assessing both what women at the BBC have been experiencing and how the Corporation has been conducting itself since it became obliged to disclose the salaries of its higher-paid staff. Balanced reasoning gives any advocacy greater substance, weight and gravity.

The three voices are skilfully inter-woven.

Few of her paragraphs linger in a single voice. Instead her sentences move in an agile way, from point to point and voice to voice. She assembles her case without falling into the trap (which is presumably a broadcaster’s worst nightmare) of switching the listener off by pushing any voice too hard, turning advocating into preaching, or articulation into verbosity or critiquing into personal criticism.

You can see the explicit care she takes to de-personalise the issue, when she says, ‘None of this is an indictment of individual managers.’ Keeping the issue rather than the personalities involved as the centre of attention is a good principle to follow, if you want an issue to be taken seriously.

But there are two other features in Carrie Gracie’s letter that I believe make it not just effective, but exemplary in important ways.

The first is the deft and sparing way she uses two other voices, the challenge and the directive. These are two of the riskiest  voices in any communicator’s repertoire. Used badly, thoughtlessly or selfishly, they easily offend. Used well, they provide fresh focus and direction. I counted a dozen sentences in her letter that use these voices. They are a mere 15% of the whole, but in some respects the most immediately impactful.

Challenge is the voice that interrupts. It’s pointed; it calls attention to something that could be better. It’s not neutral; it’s the voice that says the status quo is not good enough. It calls for a re-focusing and a change of direction.

Notice how concise and to the point the challenge voice needs to be. Notice how it is more effective when it too is de-personalised and becomes a comment about the quality or inadequacy of a situation or practice or behaviour rather than about a person. Notice how it injects urgency, but is insufficient without other voices. Notice how it reinforces and redirects attention to what those voices are seeking to achieve. Notice how it invites others to start thinking and acting differently.

‘Can we all be wrong?’ is also a challenge. It’s not a question; it does not expect or welcome a range of different answers. In fact, the exploring voices – inquire, probe and diagnose – do not figure in this letter at all. That’s the point. She’s calling attention to an issue that has already been exposed. What’s needed now, she’s saying, is action.

Carrie Gracie’s most resonant challenge comes at the end of her letter. ‘To women of any age in any workplace who are confronting pay discrimination, I wish you the solidarity of a strong sisterhood and the support of male colleagues.’ This is more than advocacy, the expression of a personal view; it is a challenge to other women to provide that solidarity and to men to provide that support.

The direction to be taken is unambiguous. That’s why she only uses the direct voice twice, both in a single paragraph and as an answer to another challenge presented as a rhetorical question, ‘How to put things right?’  ‘The BBC must admit the problem, apologise and set in place an equal, fair and transparent pay structure….the BBC should immediately agree to independent arbitration to settle individual cases.

Must and should. The directive voice depends on a sense of right and wrong, drawn in this case from both legal and moral obligations in a society which espouses gender equity.

And this brings me to the other feature which makes Carrie Gracie’s letter a torch for the cause of gender equity.

The voices she uses are those which (as my own research with VoicePrint has clearly demonstrated) tend to be used more by men than by women. Advocate, Challenge, Critique and Direct tend at a gender level to be male-dominated. This is a tendency which has its roots in cultural history. It is not a tendency which needs to persist. Indeed as long as it does, it has the effect of biasing dialogue in a way which disadvantages not only women but society as a whole.

Again, enough is enough. This must change. It needs a critical mass of women to follow the example of those individuals among them, like Carrie Gracie, who are unafraid to use these voices and willing to deploy them, as she has, with awareness and skill and when the moment requires them. It needs those of us who are men to actively support women in this respect and to curb the tacit bias that holds the existing pattern in place.

Until we tackle gender equity’s speech impediment, as well as its pay defects, we will be continuing to make the mistake of treating the sex with ‘the quieter voice’ as if it has less to offer.