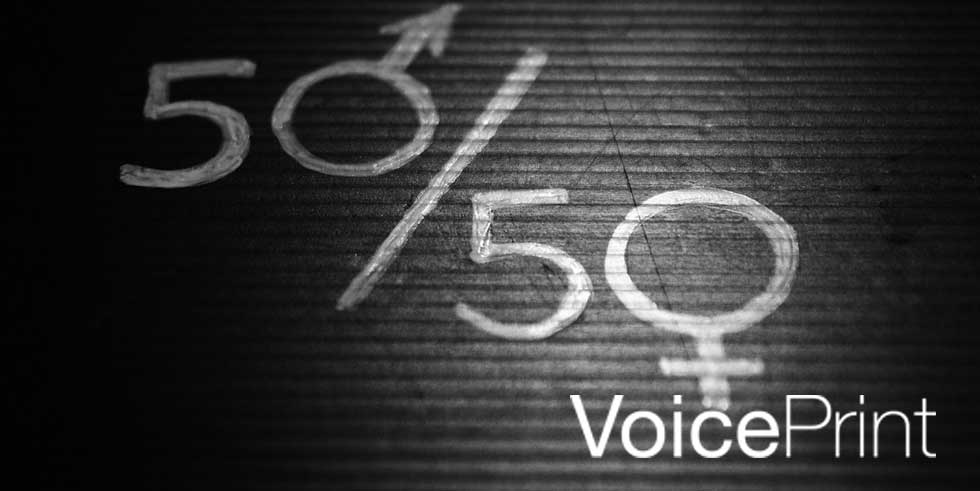 Gender Equality Has A Problem

If we’re serious about gender equity, we need to prove it.

While a few cultures evidently do not believe in equal opportunity for the sexes, most now at least espouse it and have policies that support it. Unfortunately, micro-discourse and behaviour too often belie our public utterances. So when I say that ‘we’ need to prove we’re serious about it, I mean ‘we’ at every level, nationally, organisationally, inter-personally, at every cultural level where people meet and interact.

Some might object that it is time to stop talking about gender equity and start doing more about it, but actually it is time to start talking differently, in a way that respects and manifests gender equity. This is one of the most powerful and immediately available ways of bringing it into being.

Men and women tend to talk differently. This is not a sexist or discriminatory proposition; it is a well-researched phenomenon. American socio-linguist Deborah Tannen [1] has published her extensive findings on this point in a series of very accessible books, revealing fundamental differences in male and female conversational styles. Oxford scholar Deborah Cameron draws similar conclusions in her work [2] and is, if anything, even more critical of the social and human costs of the asymmetry to be observed in how men and women are expected and permitted to communicate. Both of these well-informed writers agree that this inequality is neither innate nor biological, but a cultural phenomenon, reflecting the very potent way in which behaviour is shaped from birth by prevailing social patterns.

What this also means is that if we want gender equity, we have to re-examine and be prepared to change those prevailing patterns, root and branch, in every circumstance and occasion where culture is created, formed and maintained. And culture is created, formed and maintained, not in abstractions, but in the everyday activity of conversation. The opportunity (and the responsibility) to bring gender equity into being rests with each of us every time we meet and speak.

The opportunity and the impediment

The VoicePrint model identifies nine distinct ‘voices’, or modes of expression, each of which has a distinct and necessary part to play in making communications effective. Studies (both self-report and, more importantly, from 360 feedback) of how people actually use these different voices show that individuals can and do use any and all of the voices: Articulate, Advocate, Advise, Challenge, Direct, Critique, Probe, Inquire and Diagnose. The entire range of voices is equally available to both men and women alike. In practice, however, almost everybody uses a more limited, individual repertoire, shaped by their own habits and preferences. But in the last resort an individual’s range is only constrained by how far they are prepared to go in developing the awareness and skills necessary to use the different voices in practice.

In principle there need be no impediment to individuals, teams or cultures developing conscious, capable and, crucially, more equitable and productive patterns of interaction. In practice, obstacles will remain until a critical mass of individuals, teams, organisations and cultures have taken – and then continue to take – the active steps necessary to turn those conscious, capable, more equitable and more productive patterns into everyday and normal occurrences.

While the opportunity is open, there is currently an impediment in practice.

VoicePrint research [3] corroborates the findings of the two Deborahs, Tannen and Cameron. It shows that men tend to make more use than women of the Advocate, Challenge and Direct voices, while women make more use than men of the Inquire voice. The findings are clear and statistically significant. They indicate that men in general rely more on voices that are decided, assertive, competitive and controlling, while women on the whole draw primarily on the voice that is open to difference, involving of others and oriented to relationships.

This asymmetry in usage between the genders constitutes a speech impediment, because it establishes a tacit expectation about what is normal and acceptable. It constructs an un-obvious but powerful filter which distorts the way a particular voice is heard and interpreted when used by a member of the sex which tends, relatively, to under-use it. Thus women who Advocate strongly are judged to be unduly pushy, whereas the same behaviour from men would be deemed ‘naturally’ assertive. The same Challenge is judged over-strident and aggressive, coming from a woman, but simply normal ‘cut-and-thrust’ from a man. The same expression in the Directive voice is heard as authoritative in a man, but bossy from a woman.

The unspoken filter of expectation affects men too. Those men who use the Inquire voice to a ‘more than usually masculine’ extent, or at least those who use it to find out what others are thinking, feeling or are concerned about (rather than employing it as a disguised form of advocacy, challenge or direction), are in danger of being viewed as soft, indecisive and unsure of themselves.

So the distorting filter works both ways. It influences how both sexes are heard and it tends to influence how they speak (or hold back from speaking) for fear of being heard and judged adversely. Social expectation, as it currently stands and as long as it is unconsciously maintained, serves as a constraint on how men and women talk, listen and are heard. It limits the full range of resourcefulness that can be brought into conversations and interactions.

To dismiss these observations as simplistic generalisations would miss the point twice over. First, of course they are generalisations; they are drawn from the overall patterns found at an a gender level. Secondly, and more importantly, the general tendency invites us to pay more attention to the specific case and that is where we have the opportunity to make real differences in practice.

The principal purpose of this blog is to highlight the existence of a problematic and long-standing tendency which, because it exists at a social and cultural level, may escape notice at the individual and inter-personal level at which it needs to be tackled. Its second purpose is to invite those who care about the problem to do something active to resolve it.

The call to action

Women are often called upon to shoulder the primary responsibility for taking the action steps required to achieve gender equity. But it’s clear that it needs both men and women to act differently in how they speak, listen and hear (and how they facilitate the speaking, listening and hearing of others) in order to remove the existing impediment.

Here are some initial suggestions about how that can be done:

How would you like to lend your voice to the conversation that builds gender equity in practice?

[3] Robertson, Alan: (i) Gender Differences in VoicePrint: a research study (2014);  (ii) Lost in the Noise: how gender is undermining productive conversations (2016), papers available to accredited VoicePrint practitioners; (iii) The Sound of Breaking Glass: four strategies for women to make their voices heard, (2017) https://letstalk.voiceprint.global/4-strategies-women-make-voices-heard/

vp-adminGender Equity has a Speech Impediment: what are we going to do about it?01.10.2018