This is the second in our series of features illustrating the use and importance of particular voices in different occupations and contexts.

Freeland Barbour is, although he is too modest to say so himself, a highly respected and internationally acclaimed composer and musician, who works primarily but by no means exclusively in the musical tradition of his native Scotland. A former BBC producer, he continues to produce records as part of the portfolio of creative interests that make up his career.

The recording studio is a more pressurised working environment than you might suppose. Few musicians are afforded the virtually unlimited time or budget enjoyed in their heyday by the Beatles, whose own first album had to be recorded in a single day. For most the constraints of time and cash are tight. Recording is also very different from live performance where the spontaneity of the moment permits or even celebrates rough edges. In recording the emphasis is on definition, precision and quality. You’re making a product that needs to deserve shelf-life. The stakes are high and everyone knows it.

It’s no wonder then when Freeland says that ‘The one thing you don’t want is to over-excite people.’ That doesn’t help to keep a group of musicians together. It’s more likely to drive them into tensing up, focusing too much on their own playing, retreating into themselves or giving up altogether. It’s no wonder either that he identifies being sensitive to how people are feeling as a key ingredient in being an effective producer and sound engineer. 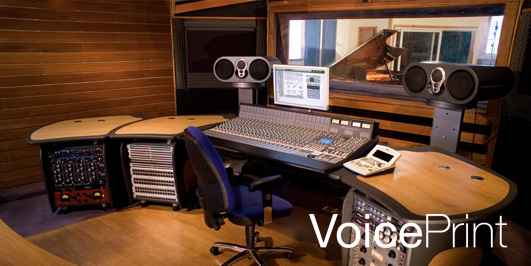 Sensitivity to others is very evident in Freeland’s own VoicePrint. All nine voices are present in his profile, but unusually not one of them falls in the high range where the dangers of being misunderstood and of alienating others are most acute. This indicates measure and composure in how he talks. Interestingly, the voice he is least likely to employ is to direct, but he will use it, if the occasion requires it. ‘You have to keep a grip on the session. If it’s no good, you stop them. I’d simply say, “Stop – it’s not hanging together.”’ But ordinarily he doesn’t have to use any of his voices with force, because as he explains, ‘People are there because they want to be.’ As he points out, ‘My world is individual rather than corporate. It’s not about laying down the law or ramming ideas down people’s throats.’ His role as a record producer is at least as much about human skills as it is about technical expertise.

Respect for the individual is his foundation for getting the best out of a group of performers. When asked about his interactional ‘red lines’ his answer is prompt. ‘I’d never be rude to anyone either publicly or personally. You need to get to know the individual personalities of your players. Like all of us, they each have their own idiosyncracies which can affect their performance, especially when they’re under pressure. So you have a code for how you call their attention to that. If there’s someone who has a habit of sometimes playing flat, for instance, I’ll say something like “Can you just check your tuning for me, please?”’

‘You have to be particularly careful when people are getting tired or when machinery breaks down. That’s when you all get frustrated and you particularly have to watch out and watch yourself.’

Unsurprisingly, Freeland’s principal voice is to articulate. It’s the voice that prizes clarity of expression and that is careful and nuanced. It’s also the voice that can serve to build shared understanding. ‘In the studio you’ve got technology and walls between you and the players, so you have to keep communicating with them so they know what the situation is and what they’re to do.’ Sometimes also, ‘they can’t articulate what they want, so you have to be good at articulating for them.’

His own experience and expertise, both as musician and producer, not only help him to articulate but are also reflected in two of the other voices which feature prominently in his profile, advise and advocate. ‘The important thing is to know what you’re talking about, and there’s a lot you have to know. You need musical knowledge and to be able to read a score. You need technical know-how, what can and cannot be achieved with the technology that you’ve got. You need to know what things cost. You need to know any relevant regulations, which might include things like what the musicians’ union’s rates are once you go into overtime.’

‘If you know what you’re doing, you get respect.’ It’s a good illustration of the broader truth that, if you’ve earned a reputation for knowing what you’re talking about, you don’t usually need to be forceful to secure a hearing for your point of view or suggestions.

The other voice that is central to Freeland’s profile is to inquire, the voice that seeks to connect with others and to understand them, their needs and their concerns. ‘Before you even get into the studio you’ve been discussing with the band leader or leaders and you know what they’re trying to achieve. And the first thing I do when they arrive is to help them to unload, set up their stuff and have a chat. It’s all about building rapport.’

But inquiry does more than that. As the most open-ended of the exploring voices, it is clearly implicated in the creative process, especially when coupled with the willingness to develop a distinctively personal view. In Freeland’s case this interplay between the exploring and the positioning voices lies at the heart of what he does. ‘The producer must at all times be creative, have ideas and articulate them or not as circumstances dictate, and be ever-willing to listen to the ideas of others even if they might seem slightly bonkers (sometimes a nutty idea leads to something worthwhile – and sometimes it doesn’t!).’

‘My job is to do what gets the best out of the performers, imparting enthusiasm and the sense that it’s all worthwhile.’

We all have at least some conversations that might turn out better, if we approached them more like a record producer.

My very grateful thanks to Freeland Barbour for agreeing to be interviewed and featured for this article. If you want to hear his distinctive musical voice for yourself, go to www.freelandbarbour.co.uk or, if you too can read a musical score, or you just love magnificent pictures of Scotland, have a look at his collected compositions in The Music and the Land, published by Birlinn, ISBN 9781780273006