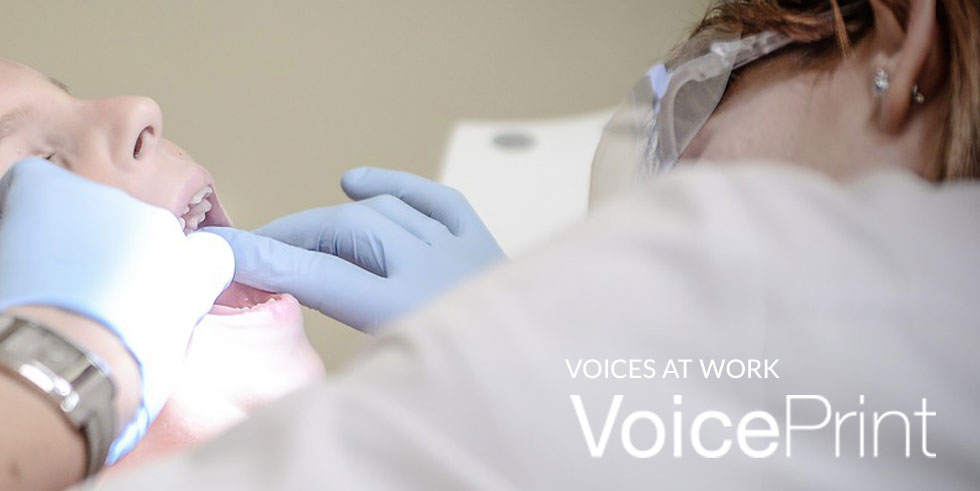 The great thing about lying in the dentist’s chair is that it obliges you to listen.

And if you listen carefully, it helps you to gain a sharper (ouch!) appreciation of some of the very different forms that conversations can take.

Mary has been my dentist for years. We’ve both forgotten how many. I like the way she works for three reasons. First, she always treats you like an intelligent, grown-up participant in the business of looking after your teeth, whether the way you’ve been doing it deserves that or not. Secondly, she keeps the interventions to a minimum: she endeavours to make your original teeth last as long as they can and doesn’t undertake major bits of work until that becomes the most sensible option. Thirdly, and actually this might really be the most important reason, when you have to have an injection of local anaesthetic, she somehow manages to do it in a way that is unexpectedly but joyfully almost pain free.

Mary conducts four different conversations every time I go to see her. Two are with me, one is with her assistant and the other is with herself.

Her first conversation with me revolves entirely around one voice, Inquiry. ‘How’s the family? What are the children up to?’ we ask each other. (As I say, we’ve known each other for years.) Inquiry like this is of course a quick and natural form of expressing personal rapport. Then she moves into professional Inquiry. ‘And how are the teeth? Any of them giving you trouble?’ This is Inquiry in its role as the best way of conducting an initial exploration of a potential problem space, by involving the person who owns the problem, or in this case the teeth, and who can describe any symptoms from first hand experience.

The first conversation comes to an end with a change of voice.

Mary switches to Articulate. ‘Okay, if you put your head back, I’ll have a look.’ She doesn’t really need to say this. I know the drill. (Sorry, no more puns!) More often than not the chair and I are already starting to recline as she says it. She’s not instructing me with the Direct voice. She’s using Articulate as a sociably professional way of positioning where we are in the process.

Mary’s second conversation is with her assistant.

Lisa is on hand throughout the proceedings to fetch, prepare, hold and pass the various implements and mixtures that go into the mystery of dentistry. I say mystery, because by this stage I’ve got my head back and these things are carefully transferred below my line of sight. I’ve long suspected, and Mary one day confirmed, that this is done deliberately as part of a general mode of operation, which includes the soothing classical music constantly playing in the background, all designed to keep the patient calm and relaxed. (Mary once told me that dental students develop their skills by working on a practice skull affectionately known as ‘The Phantom Head’, so ever since then I have appreciated the discretion with which she and Lisa exchange drills, clamps, moulds and the innumerable devices for probing and re-engineering.)

Probing, of course, is exactly what Mary is doing as she reconnoitres the state of my teeth in her initial examination.She also uses the Probing voice in her conversation with Lisa. ‘Do we have any more…?’ ‘Can you get the larger one?’ But her principal voice in this conversation, especially as we progress from initial examination into the execution of a procedure, is to Direct. The dentist is in charge. She calls for particular forms of assistance at particular moments. ‘Hold that there please.’ ‘Slightly further round.’ ‘I need the previous x-rays please.’ ‘You can prepare the mix now, I’ll be ready for it in a couple of minutes.’

The flow of words is largely one-way, punctuated by an occasional question of clarification from her assistant. It’s a great illustration of the function and appropriateness of the directive voice from the person in charge of a task to someone with particular responsibilities to help out with the achievement of that task. There’s nothing offensive about how she directs. It’s clear, concise and to the point.

The third and actually the most interesting conversation that’s taking place is the one I can’t hear.

That’s the internal dialogue that the dentist is having with herself as she conducts her examination, then decides what’s to be done and then works her way through the intricacies of carrying that out. It’s like being an archaeologist or a detective or anyone whose work entails investigative problem-identification and problem-solving: even with sophisticated diagnostic techniques, you never know exactly what you’re going to encounter or how to deal with it until you actually start digging.

It’s not quite accurate to say that I can’t hear Mary’s inner dialogue. I get some sense of it, when she finishes her examination and pauses to tell me what she’s found, what the implications are, what the options are, what she would recommend and how we might proceed. This is where she verbalises and her talking works its way through a necessary succession of different voices, Diagnosis, Articulation and Advice.

So I’m involved, and rightly so, because except in extreme cases (‘I’m afraid that tooth is broken beyond repair, you’ve got an infection and it’s going to have to come out.’) I’m the one who ultimately has to decide what course of treatment to undergo. So Mary advises, she cannot direct.

But it’s a different story once we’ve committed to action. I might be in the dentist’s chair, but she’s in the driving seat. She’s the expert. She has to carry out the job. Besides, with my mouth full of mirror, drill, irrigation and suction equipment, not to mention the sensation that one side of my face has already dropped off, I’m no longer in a position to play much of a part in the discussion. My role, apart from keeping my teeth very much the centre and object of attention, is reduced to that of a small warning light. ‘If it hurts at or you want me to stop at any time, just raise your hand.’ I’ve become a simple feedback mechanism. Sometimes I raise my hand. Sometimes I try to say something more informative. The fact that I do this, even when it sounds unintelligible, is an indicator of how much we all like to be included in conversations.

It probably isn’t helpful for Mary’s inner conversation, having to divert attention to decipher my garbled noises. Having gone through  problem definition, option evaluation and solution selection, using the Probe, Diagnose, Articulate and Critique voices, her thinking is now most probably focused on an ongoing interplay between Probe and Advocate, as she uncovers the specific demands of the task she has undertaken and consults her own professional expertise and experience to take a view on how to deal with them. It’s not a time for the Advise voice; she has to take a position in relation to what she encounters. So she must take her own view on what is the right course of action. It’s a reminder that the Advocate voice is in action, especially for experts and specialists, even when there is no-one else actually involved in the conversation.

The fourth and final conversation takes place when all the drilling and filling and other repair work is done.

I’m involved again as a conversationalist rather than simply the wrapping that the teeth come in, but my role now is to listen and to inquire. Mary is back in Advise voice. Some of the advice is immediate, most of it is more forward-looking. ‘You might experience some discomfort for the next day or two as the anaesthetic wears off. Warm salty water as a mouthwash can be helpful to relieve that.’ ‘The plaque had built up around those two teeth in particular; make sure you get the brush in between those every day.’ ‘Let me know of that heavily-filled one starts to give you any trouble. There’s a surface crack in it, but I don’t think we should disturb it, if we don’t have to.’ ‘Not too many sugary sweets and cakes, remember!’

Dentists, like other healthcare professionals, have multi-faceted roles. They are expert diagnosticians, technicians, repairers and advisors. They may work some of the time in silence, but at the same time they are always in conversation, both outwardly or inwardly, with the problem on which they are working.  Like the rest of us, they need the right voice at the right time to do the job in hand.

With special thanks to my very patient and skilful dentist, Mary Blessing, for kindly agreeing to let her work be the subject of this feature.