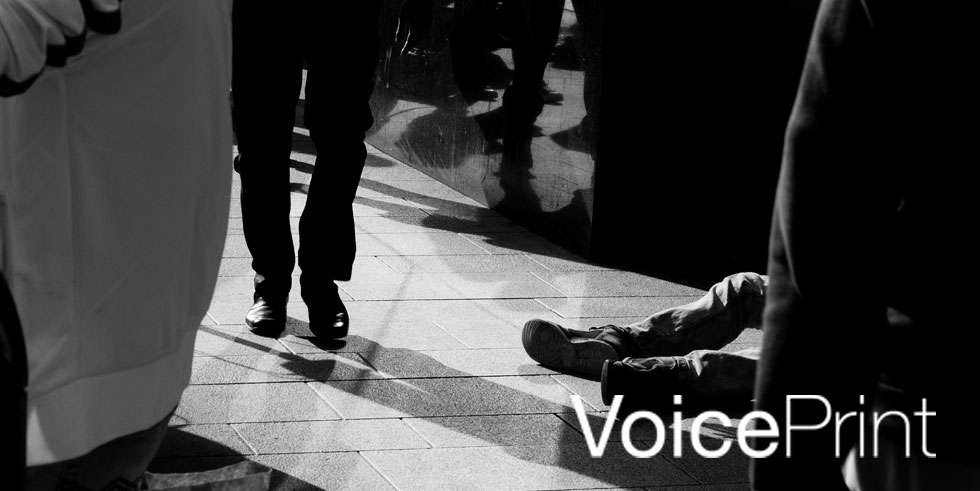 A focus on nameless people who are out of work, reveals that our voices are always at work, even when we are not.

In some occupations, perhaps most, certain voices are particularly important. Diagnosing and directing are essential parts of being a paramedic. Detectives need to probe and evaluate. Salespeople need to use both inquiry and advocacy. But what about the out-of-work? Are they voiceless as well as jobless?

Many people beg for money on the streets of London. Four of them recently caught my ear.

The two instrumentalists busking outside Farringdon Station were using the universal language of music to sell themselves. Whether or not their passing audience had a taste for the jaunty strains of mandolin and bouzouki, there was no question that it picked them out from the crowd. It might only be gaining them fleeting moments of attention, but it was turning heads towards them, and there at their feet was the hat, perhaps primed but already containing a few coins. It was clear what they were saying. But which voice is this in VoicePrint terms?

It’s tempting to think of it as a form of question, a way of asking, ‘Will you give us some money for entertaining you?’ But that would be a very implicit sort of question, at odds with the nature of true Inquiry, which asks without preconception. So you might hear it as a form of Probe, an indirect way of gently exploring whether there is a basis for a transaction. But it seems to me that busking is a form of advocacy. There’s no real ambiguity to be explored. It’s a way of presenting yourself and your position. It’s a way of standing out and making your case for support.

It’s also a reminder that there is an element of performance in the use of the Advocate voice, that entertaining others is one way of endeavouring to win them over.

I was only a few yards further up the street when I heard another. She was sitting on the pavement, bundled in a dull, shapeless coat, her shoulders wrapped in a blanket, her head swathed in a plain scarf. ‘Please.’ That was all she said. A small word in a small voice. It was as tentative as the way she held out her hand, listless, short of hope or expectation. ‘Please.’ It was so quiet, so powerless, I barely heard it.

‘Please’ here is not a question. It’s a signal, a weak, flickering sign that’s as far removed from a bold, flashing neon advertisement as you can get. But it is another form of advocacy. ’Please’ is the advocacy of the anonymous, the voice of poverty, the last uttering before the silence of complete helplessness.

And this is a reminder that advocacy is not necessarily a powerful voice. In the world of work we’re accustomed to hearing it delivered with power, opinion forcefully expressed. ‘I think.’ ‘In my view.’ ‘I don’t agree.’ But advocacy gains power from circumstance. To those with power – the power of position, of expertise, of valued experience – it amplifies that power. For those without power, advocacy has to draw on its deeper root as the voice of individuality, echoing in a muted appeal to a common humanity. ‘Please.’

The barefoot man on the pavement in Piccadilly invoked that common humanity in a different way. He’d been sleeping rough in a stained sleeping bag and a sprawl of cardboard coverings, outside the well-heeled shops on the south side of the street. He was sitting as I approached and I saw him hold out his hand and say something to the man ahead of me who was passing him at that moment. I couldn’t hear what was said, but the passer-by swerved abruptly away from the outstretched hand. Barefoot leapt up, wild-haired and wild-eyed, spit-firing a mouthful of abuse both at swerving man, now hurrying-away-head-down man, and at the uncharitable world in general. He swore until he and his anger had subsided back to the pavement.

Advocating often comes loaded with emotion. From anger and distress to outrage and compassion, feeling can give advocacy an added weight and resonance – at least to the ears of some – that coolly-argued logic cannot provide. But emotion in a voice is like a fizzy mixer in a drink, it accelerates its impact, positive or negative. Emotion can twist a functional voice into its dysfunctional counterpart – it can turn advocacy into a harangue – or even into a different voice altogether. Unmanaged emotion often turns it into an over-blown controlling voice. It’s small wonder that begging in your bare feet leaves a thin skin between speaking up as a fellow human being and shouting out at being shunned, between Advocating and Challenging, the principal voices for expressing difference.

Our voices are always at work, whether we are or not.

Advocacy can be explicit and forceful or tacit and passive. It can be direct or indirect. It can be sustained and amplified by role, responsibility, status and expertise, or undermined and diminished by inexperience or lack of seniority as well as by joblessness, poverty, homelessness and discrimination. Some conditions assist it to be central to dialogue and discussion, others drive it to the edge, the periphery, the margin. But its function remains the same – to put your position to others. This is something that every one of us ought to be able to do, in work or out.