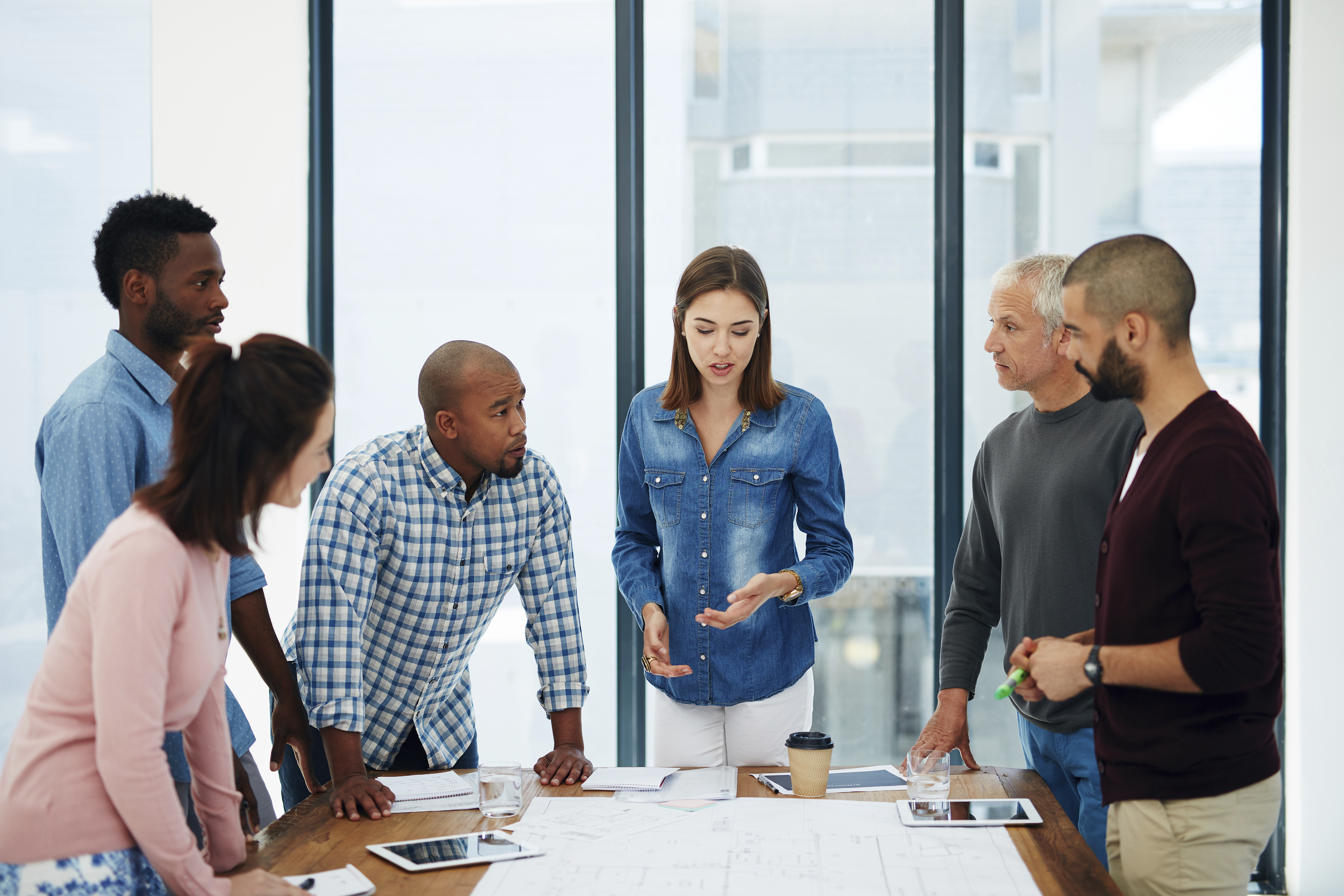 I like to think that if he had not become an eminent educational psychologist, Bruce Tuckman would have been a successful lyricist in the world of pop music. It’s now more than fifty years since the seminal paper (1) in which he coined the phrase ‘Forming, Storming, Norming & Performing’ and gave us a catchy refrain or ‘hook’ on which to hang our understanding of the process through which small groups develop. The snag, as with so many songs, is that the chorus is the only bit that we remember clearly.

The point that Tuckman was making, but which is commonly forgotten, is that these were stages that teams need to go through, if they are to develop to the point where they can perform effectively. Unfortunately, Forming, Storming, Norming & Performing are often presented as a description, as ‘the stages that teams go through,’ as if that development were inevitable. But development is never inevitable. My own observation, from teams that I have worked in or with, is that Forming, Storming, Norming and Performing are potentially sequential stages, but are more immediately – and more usefully thought of – as states. More specifically, Forming and Storming are states in which groups can easily become stuck, while Norming & Performing are states from which groups can too easily regress.

An important question then is, what can be done to get groups through forming and storming, to prevent them from becoming stuck, and to keep them in norming and performing long enough to reap the benefits? From a talk-wise perspective the answer lies in the nature of the conversations that the group is having in each case.

Let’s remind ourselves about what is happening during forming, storming, norming and performing respectively.

Forming is about orientation and testing. Group members are orienting themselves to the group’s task and to each other, testing where they fit, how they might contribute and how they might be dependent on others.

Storming is about intra-group conflict and reflects individual members’ emotional responses to the demands of the group task and to each other. It is essentially an indicator of the tension between self and group, a resistance to the subordination of self to group and others.

Norming is a state in which difference becomes less a source of tension and more of a source of collective strength. Resistance and rigidity shift towards greater openness and greater readiness to respect and accept other group members, their opinions, styles and contributions. Norming is the creation (or emergence) and adoption of rules and roles, either explicit or implicit.

Performing is the state in which those rules and roles have become flexible and functional. Issues about the group’s structure have been adequately resolved and the resulting inter-personal structure becomes the means through which people’s energies are productively channeled into the accomplishment of the team’s tasks and challenges.

It’s worth noting in passing that Tuckman later identified a fifth state, which he called Adjourning, to describe the anxiety, sadness and letting go entailed in the termination of a successful group, or an individual’s departure from it.

The talk-wise proposition is that a particular type or pattern of conversation will be helpful in each of these five states. The absence of that productive pattern, or the presence of a particularly dysfunctional pattern, or simply the somewhat shapeless and semi-random nature of so many discussions, will all undermine the process of a group or team transitioning from one state to another, more evolved one.

So what particular pattern of conversation is useful in Forming, Storming, Norming and Performing respectively? Why? What makes it useful and, most importantly, how do you create and sustain that pattern in practice?

The problem inherent in the Forming state is that people, concerned to understand whether and how they fit in the team, are likely to be cautious, somewhat reserved and particularly over-sensitive in their first impressions of others. This can give the early conversations their typically superficial, formal, rather formulaic character. People’s authentic voices are either withheld or muted, making the process of getting to know one another more difficult. The problem is further compounded by over-sensitivity to voices that are perceived negatively. Concern about one’s place in the team unsurprisingly makes people especially sensitive to anything peers say which might sound patronising or preachy, or like criticism or an attack.

This over-sensitivity is partly a failure to listen with objectivity, but more fundamentally it is a blind spot in self-awareness. This is a very common problem and an issue which a talk-wise development intervention will always be looking to address.

In the context of Forming, the team leader needs to emphasise the importance of listening and should promptly Challenge to rectify potential misunderstandings and misinterpretations. This means attributing positive intent to inputs or ‘voices’ which might otherwise be interpreted negatively. For example, ‘Thank you; a thorough and objective critique is always going to be useful, when we need to evaluate ideas and proposals.’ Or, ‘Suggestions based on personal experience can be valuable, when we need to think through alternative courses of action.’ These are ways of modelling contextual awareness and previewing useful norms as well as containing more immediate misconstruals.

During Forming the team is particularly dependent on its formal leader, who needs to make good use of this reality by actively steering and commenting on the conversation, reinforcing the voices that particularly aid the forming process. This means sponsoring Inquiry, so that team members are encouraged to get to know each other, Articulation so that they are more comfortable about introducing and revealing themselves, and listening, so that what is said is also correctly heard.

In Storming the latent conflicts, that are always present when different people are called upon to work together, start to make themselves felt, whether as overt disagreements or as unspoken tensions. We know a great deal from research with VoicePrint about how conflicts are reflected in the way people talk.(2) Some people withdraw their voices, both literally and metaphorically, from the discussions. Some have a lot to say, but may lack focus or clarity, as what they are doing is trying to restore harmony by single-handedly keeping the conversation going. Others are more focused on what they personally want to say, even if that means ignoring, talking over or interrupting others to do so.

In all this clamour the most obviously dysfunctional dynamic is when the group gets stuck in a pattern of competing Advocacies and Challenges, where decidedness squeezes out co-operation and creativity. The most productive pattern for addressing and resolving the conflict of Storming is a sustained and patient cycling between Inquiry, to uncover each person’s real issues and concerns, and Articulation, to demonstrate clear understanding of each other and to express and consolidate the position that is being progressively developed through the conversation.

There are other combinations of voices which can support and embody a collaborative conversation (3), notably Probe-Advise and Challenge-Evaluate, but they are more likely to work effectively when the team and its fabric of inter-personal relationships and understandings is more mature. During Storming these patterns are more prone to misinterpretation and the greater neutrality of the Inquire-Articulate dynamic tends to be more productive, even though it can be time-consuming.

Again, the team leader needs to take the lead, make the time and set the tone, by using, calling for and maintaining the requisite voices. But it’s impossible to sustain a collaborative approach to conflict and disagreement by oneself. So when the group is in Storming, it is an important opportunity for individual team members to contribute to the iteration between Inquiring and Articulating. This not only makes the patterns work, but it also demonstrates the individual’s value as a team member.

Norming – talking one for the team

A collaborative problem-solving pattern of talk is doubly useful: first, it helps the team to deal with its internal conflicts and get out of the Storming state; secondly, it provides a model for how the group might successfully develop further patterns of interaction or norms for how it conducts its business. The open-mindedness of Inquiry and the clarifying power of the Articulate voice continue therefore to be of particular value as the group starts to develop its norms, not least because of their role in engaging team members and connecting them with each other.

But there is more to Norming than that. Norms imply standards and standards are the particular province of the Direct voice, the one which calls attention to responsibilities. Being directive is a vital ingredient in the development and maintenance of norms. The difficulty is that the Direct voice is laden with social risk, especially perhaps in the high stakes arena of a small group. It is a controlling voice: it instructs, corrects and constrains. Who in a team context will be accepted as having the right to use the Direct voice? Positional authority legitimates its use by the team’s leader, but this is a narrow, ‘formal’ basis for maintaining standards. Its use, and acceptance, by the members themselves is a much more powerful indication that a team is norming.

One of the key responsibilities of team members, therefore, is to become vocal guardians of the team’s earlier undertakings and commitments. ‘Just a moment, didn’t we agree that we would…x.’

This is ‘talking one for the team.’ It is more than a Challenge. It is an explicit reminder of what has been previously agreed and it is an appeal to colleagues to rally and lend their weight to this call for compliance. These are defining moments. A group which comes together at this point is well on the way to become a team with ‘live’ norms that actually work. If there is no cohesion at this point, the group is sliding backwards, into irresolution, the worst form of Storming.

Performing – a voice for every occasion

Performing is of course the desired end-state, where people’s energies are flowing and combining effectively to tackle the diverse tasks and demands facing the team. Conceptually, this is the pay-off from the inter-personal development that – if it takes place – turns the earlier states into developmental stages. But what are the talking behaviours that constitute the Performing state? The answer is simultaneously easy and hard.

The principle is easy. The TalkWise VoicePrint model identifies nine different voices, because there is a time and a place for each. Teams need all the voices to be able to explore issues and opportunities, to develop positions, to assess, manage and improve. The need for this range and flexibility is what makes the practice harder. Teams, like individuals, tend to have distinctive VoicePrint profiles, over-relying on some voices and under-using others.

Team leaders and team members who are talk-wise know this and are alert to these tendencies. They don’t speak solely to address their own needs and purposes. They intervene and facilitate discussions actively. They work on the development not only of their own voices but also on the development of the bigger conversation, the what, when and how of the team’s talking.

Alan Robertson is a business psychologist, Director of TalkWise Ltd, and the developer of VoicePrint.