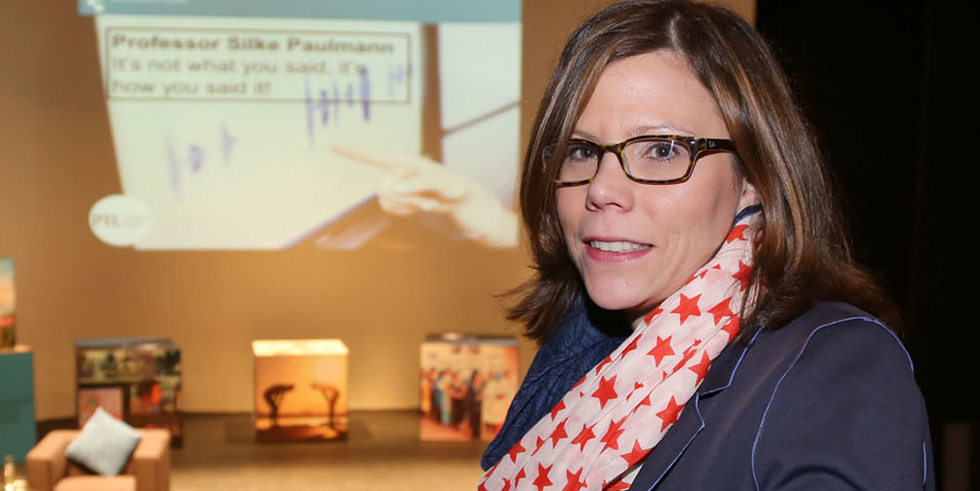 This latest blog comes from guest contributor, Dr Silke Paulmann, who is Professor of Psychology at the University of Essex and an expert on the ‘non-verbal’ aspects of the human voice and the vital part they play in communications.

The way we speak sends signals

Have you ever read the quote “People may hear your words, but they feel your attitude?” – we probably all know it; yet, we seem to often forget how much power our voice can have. The way we speak signals to others how we feel or how we think about something: a confident “yes” in response to a marriage proposal conveys assurance that the person will want to spend the rest of their life with the proposer. A weakly expressed “I’m fine” when being asked how you are, leaves a degree of uncertainty to whether you really speak the truth. Voices connect people – they share ideas, can change minds, show empathy, create communities. The power of voice is not to be underestimated.

What do these voice cues reveal?

But what exactly can voice cues reveal about us as individuals? And how much of this information that we transmit are we actually in control of? It’s one thing to actively show how you feel about the outcome of the most recent election in the way you modulate your voice; quite another to innocently reveal to your new manager how nervous you are about making a good first impression. Voice characteristics have long been known to leak information about a speaker and their mental state. As early as the second century, Greek scholars were already investigating what kind of information our voice reveals about us. Some have even argued that the voice is the most leaky channel of all non-verbal behaviours. Part of this information leakage is closely linked to the configuration of our vocal tract. For instance, men generally speak in a lower-pitched voice because their vocal tract is longer and their vocal folds vibrate at a slower rate when compared to women. These features are difficult to alter or disguise successfully. The same is true for our age. Due to changes to our vocal system as we age, listeners can distinguish younger from older speakers quite easily. Our muscles naturally degenerate and our control over them decreases with age, affecting our control over the respiratory and phonatory systems. Hence, it will be quite difficult for a 75-year-old to pass as a 20-year-old when speaking on the phone.

In addition, as we’ve all experienced, voice also adapts to contexts: we raise our voice in crowded environments, we tend to whisper in waiting rooms, or use a higher-pitched voice when talking to babies. We can also reveal group membership through the way we speak: accents tell others where we come from or where we live, and more subtle voice cues have even been argued to be used by others to infer our sexual orientation. For instance, some research suggests that gay/lesbian speakers may use more precise articulation than heterosexual ones. Crucially, speakers are often unaware of how much their voice reveals about them.

Messages about how we feel

By varying how high or low we speak, how we modulate the sound of our voice over time, how loud or quiet we express our thoughts, how fast or slow we utter a sentence and by using a rough or soft-sounding voice quality, we tell others how we feel. For instance, when we’re expressing how happy we are that we finally got the well-deserved promotion, we tend to speak in a high pitched, smooth, loud-sounding voice, making use of a wide pitch range. In contrast, when talking about our most recent break-up, we’ll more likely use a quieter voice, speaking slowly with a low pitched, potentially more mono-tone voice than we usually do. At times, we may vary acoustic parameters consciously, for instance when we raise our voice to get someone’s attention. At other times, these cues are modulated involuntarily and can thus express our inner state to others even if we had no intention to display how we felt about an issue. After all, there is a difference between hearing “I loved reading your blog” and “I (involuntary pause) loved reading your blog”. Hence, a subtle cue such as a prolonged pause will signal the listener that the compliment may not have been as sincere as one would have hoped for. Indeed, data from brain science shows that it may take only 600 ms to detect such “white lies” when communicated through subtle voice cues.

Messages about what we want

We do not only use our voice to communicate how we feel. We also use it on a regular basis to motivate others. Think of telling a colleague who is known for his talent to deflect work that they “finish this report by tonight”. From your colleague’s perspective, listening to a calm but firm tone of voice telling them what to do will likely have greater impact than listening to the same words spoken in a hesitant, shaky tone. There’s evidence from social and cognitive neuroscience that the brain actually picks up on these cues rapidly. Within an amazingly fast 200 ms, we tag speech in terms of valence, motivational relevance, and emotional significance. Not surprisingly, even babies are already tuned to how we speak. They attend longer to pressuring sounding voices than to more supportive sounding ones and the impact voices can have on us remains unchanged throughout adolescence. For instance, teenagers have been shown to show defiant reactions when listening to controlling voices. That is, trying to energise someone to action using pressure will unlikely lead to long-lasting success. It can also have a detrimental effect on listeners as revealed by studies that report reduced self-reported well-being and higher anxiety levels for listeners exposed to harsh-sounding voice materials.

And involuntary messages about ourselves

Finally, there’s also a long-lasting tradition of psychologists trying to link both individual and group characteristics to changes in the voice: some argue that extroverts vary their pitch and use a loud tone of voice, whereas introverts speak using a breathy voice quality. Similarly, anxiety often shows in a breathy, shaky sounding voice paired with a fast speech rate. Increases in mean pitch have been linked to competence and assertiveness, and listeners often interpret low pitched, loud voices as coming from dominant speakers. Depression may manifest in a monotone, low pitched, slow speaking voice and the way we speak at marriage counselling sessions may even predict how likely we’ll still be married five years later.

Importantly, naïve listeners use these voice cues to form trait impressions of speakers, and they do so reliably even when listening to very brief sound clips. For example, when rating voice clips from a number of individuals, listeners blind to background information of speakers, rate voice clips of individuals with schizoid and avoidant personality traits as being less likeable than other target persons. More successful sales managers have been rated as more persevering, confident, and professional than average sales managers by naïve raters. These quick evaluations of speakers can also be found in less “business”-minded professions, as doctors who have shown a strong patient-focus have been rated as more warm, friendly, and engaged by listeners who had no information about their caring approach.

Coming back to the claim that the power of voice is not to be underestimated, in my view, these data really just show what a marvellous tool we have at our disposal and that we should not be shy to use it or to learn to use it well.