Do occupational roles have distinctive voices, and, if so, what are they? We expect doctors in general medicine to use the Diagnose voice and barristers in legal practice to Advocate. We expect traffic wardens to Admonish and pharmacists to dispense Advice as well as remedies. So the intuitive answer is yes. But in many cases role definitions are less clear-cut than these. What voices are involved in those cases? And what empirical evidence is there to identify specific voices with particular roles?

Research into the connections between VoicePrint and what is perhaps the best-known model of occupational roles, Belbin’s team types, provides an opportunity to answer both of these questions. What follows is the product of an analysis correlating the scores of over one hundred subjects on Belbin’s Team Roles Inventory and on the VoicePrint Self Perception Questionnaire.

Belbin’s model identifies eight roles, each of which contributes to team functioning in a distinctive way, but each of which typically has a corresponding weakness or blind spot. The VoicePrint model identifies nine ‘voices,’ or modes of expression, each serving a particular, and potentially useful, function when people talk and interact. Over-used, in the sense either of  being used too energetically to the point of insensitivity, or of continuing to be employed when another voice would have been more appropriate and productive, any of the nine voices can become dysfunctional. 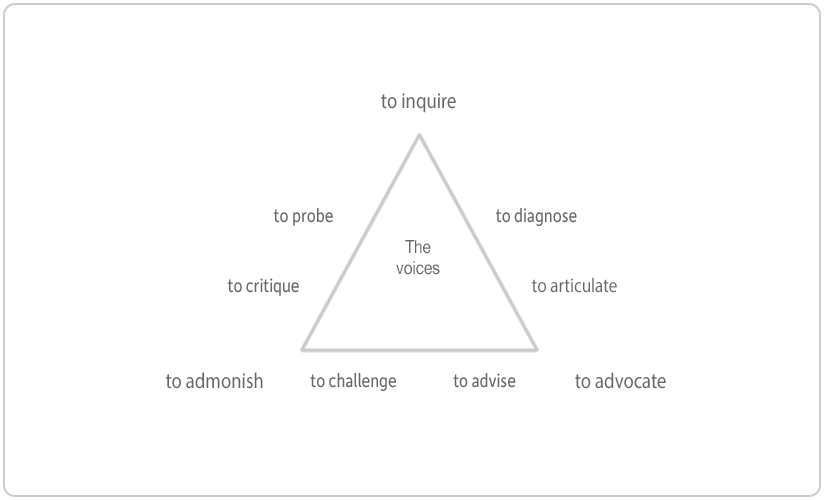 The ways in which the Belbin team roles relate to each other can also be helpfully presented on a triangular map, where the three angles depict attention to ideas, people and task respectively. The concentration of roles in the ‘task’ angle is a reminder that Belbin’s is a model of teams in a business context. 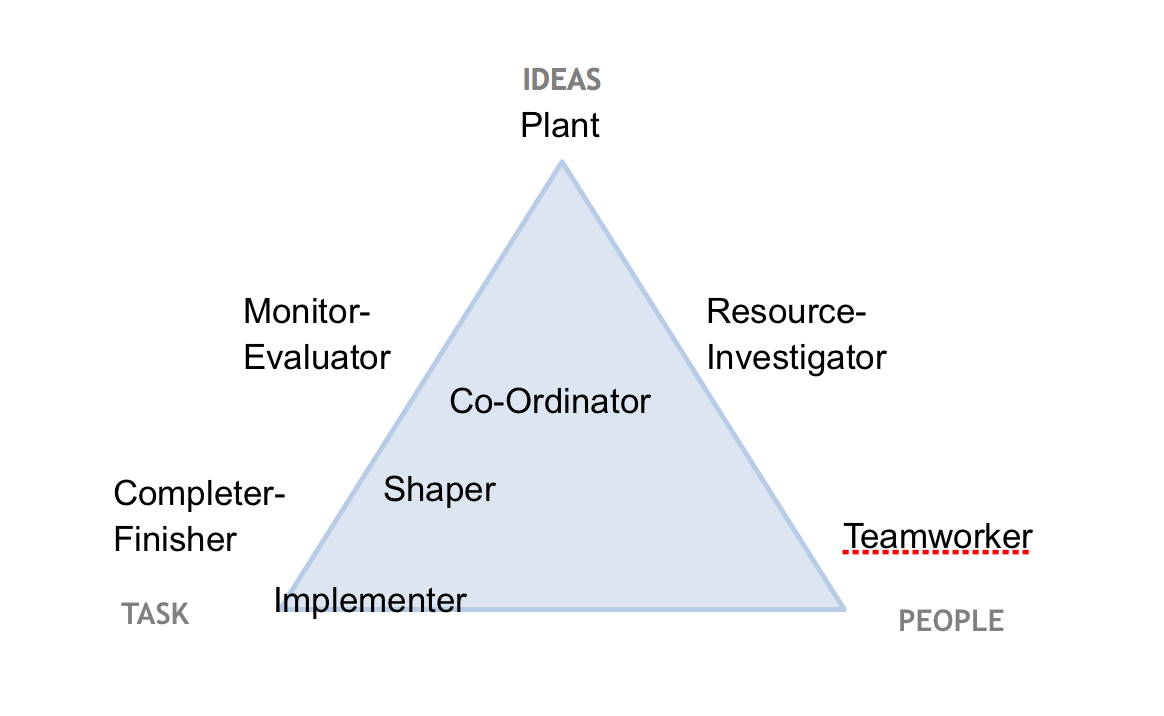 Representing both models in a triangular form should not be taken as meaning that they are two ways of describing the same thing. They are not. One is about forms of talk, the other about roles in a team. The triangle graphic is simply a potentially more insightful way of setting out the relationships among a number of variables than the more limited perspective provided by the traditional 2 x 2 matrix, the so-called ‘consultant’s friend.’  The bigger picture provided by three dimensions is valuable, because any team role is a complex of personality traits and behavioural tendencies, and a role may have more than one characteristic ‘voice.’

So what does the correlational analysis reveal about the relationship between Belbin team roles and VoicePrint voices? And does it suggest particular voices that might, if added, rectify each role’s characteristic weakness?

Belbin’s Shaper:
The achievement-oriented, driving type, who focuses the team on task but can leave working relationships bruised or broken by his relative lack of sensitivity to others, tends to make strong use of Advocate and Challenge. They take an assertive personal position and they are not afraid to interrupt to makes themselves and their opinions heard. As might be expected, none of the more open-minded or involving voices are significantly correlated with this role. The Shaper is essentially a forcer. A Shaper whose VoicePrint repertoire extends to the effective use of the exploring voices would have much more to offer.

Belbin’s Plant:
The imaginative non-conformist, who brings creativity to the team but can be a poor communicator of her ideas and a poor judge of their practicality, tends not to use the Articulate voice. This is consistent with their reputation for often failing to explain their ideas clearly. The absence of a clear positive correlation with any of the other voices is indicative of the ‘free’ nature of their thinking. These findings highlight the practical difficulties of harnessing the potentially distinctive contribution of the Plant. An articulate Plant would be a rare and precious addition to a team.

Belbin’s Resource-Investigator:
The outgoing enthusiast with the restless curiosity to be in touch and to connect the team with the wider world, but who often has little appetite for routine, also shows a tendency not to use the Articulate voice. This would be surprising, if Articulate simply meant talkative, but the effective use of Articulate is considered, patient and precise, characteristics more commonly associated with Introverts (as a VoicePrint-MBTI correlation study has shown) than with those who have a high need for novelty and stimulation. The absence of any specific voice for the Resource-Investigator reflects their mercurial style and reputation. They could make the value of their contribution more apparent by using the Probe voice with particular skill.

Belbin’s Monitor-Evaluator:
The detached, rational assessor, who helps the team by calling attention to what will not work, preventing it from wasting time and other resources, but who can de-energise people with his critical tone and negativity, tends unsurprisingly to use the Critique voice.  If you have ever felt demoralised by the way a Monitor-Evaluator speaks, you have probably experienced the thin line that divides a good Critique, which is objective and well-balanced , and a bad one, which is partial and personal. Interestingly, Monitor-Evaluators tend not to use the Advise voice (perhaps assuming that evidence speaks for itself), but might benefit from it as a gentler way of presenting their assessments.

Belbin’s Team-Worker:
Is the supportive, people-oriented type who puts energy into helping others and maintaining good feeling in the team, but who can consequently be indecisive. In general they do not make particular use of any one voice, perhaps reflecting their tendency to help out wherever necessary and the relative anonymity which can accompany that versatility. However, when pressure increases, Team-Workers tend to use the Admonish voice.  Admonish is a voice fuelled by a sense of right and wrong. Team-Workers have a strong sense of duty towards the team and its other members. The challenge for them may be in making that inner voice heard by those others.

Belbin’s Implementer:
The reliable hard-working, practical type, who helps the team by getting things done, but who may be distrustful of new and abstract ideas outside his personal experience, shares the tendency to use the Admonish voice under pressure. Implementers also make significant use of the Articulate voice, reflecting a felt need for a sufficient degree of certainty before proceeding to take action. Given the Implementer’s ‘leave it to me’ tendency to work alone, it may be that these voices are often internal rather than uttered aloud. The more rounded Implementer is perhaps the one who makes these two voices available to the team as a whole to help it to be clearer about situations, standards and expectations.

Belbin’s Completer-Finisher:
The conscientious type who pays close attention to details and deadlines, maintaining the quality of the team’s output and its reputation for reliability, but who can be anxiously perfectionist and get lost in the minutiae, tends to use Articulate, the voice which strives for precision and clarity and Diagnose, the voice which seeks a full and connected understanding of problems, but which, when overdone, can tip into over-analysis. These are not unexpected voices for the Completer-Finisher, but they lack the balancing effect of one of the three controlling voices, Challenge, Admonish or Critique. It is ironic to regard Completer-Finishers as ‘control freaks,’ when it is the absence of a controlling voice which may leave them over-investing in sense-making activities.

Belbin’s Co-Ordinator:
Is the calm, attentive facilitator of group process, who harnesses the team’s energies by bringing the diverse and potentially conflicting approaches of the other types together, so that the team as a whole amounts to more rather than even less than the sum of its parts. Co-Ordinators have one very distinctive voice, Challenge, the voice that interrupts.  Used effectively, for the benefit of the conversation, and the team, as a whole, the intention behind Challenge is to improve what is happening. In the absence of other voices, a Challenger can be perceived as aloof, clever or even manipulative. Ideally, a Co-Ordinator would also have a broad repertoire of other voices to use to ensure that conversations continue to be productive after their challenges.

Where and how can we extract practical value from understanding the connections between the Belbin team roles and VoicePrint? I can think of four immediate applications, and I would be very interested to hear other suggestions.

Alan Robertson is Director of Business Cognition Ltd, co-creator of VoicePrint and a Senior Visiting Teaching Fellow at both Cranfield University and the Cass Business School in London.